Marketing to Millennials, from a Millennial designer

If there is a common denominator in today's retail environment, it is undoubtedly that there is not one single magic bullet marketing strategy for all customers. Furniture shoppers are coming to retail from a variety of different mindsets, and the ongoing challenge for dealers is to create a multifaceted marketing program that encompasses demographic differences.
Beginning with this first blog of 2014, I'm going to add a monthly feature to Defining Style that provides consumer insight via designers for particular consumer categories. This inaugural question and answer blog kicks off with Bobby Berk, a HGTV designer and retailer with stores in New York, Florida, California, Oregon, Washington and Colorado. In an exclusive interview with Furniture/Today, Berk weighed in on marketing to Millennials.
F/T: What are retailers missing when it comes to marketing, choosing product and selling to the 35-and-under crowd?
Berk: One of the main things that I think many major furniture retailers are missing is the ability to let the under-35 crowd feel like they are doing it themselves. I feel like Home Depot's marketing is right on par-"You can do it; we can help." The Millennial generation is constantly inundated with TV programs, social media and advertisements that are teaching them how to do it themselves. This marketing is empowering them to take control of their home design without the help of an interior designer. The thing they want most is choice!
As retailers, we need to develop and market products that give the consumer choices that make them feel that they are the designer. As a retailer, designer and manufacturer, I also understand that adding too many choices creates many issues in the pipeline for us. This is why we need to be really smart about controlling the choices we offer as to now slow down our production and lead times, but to give the consumer enough choice to express themselves and create a custom look for their home.
F/T: Everyone knows that social media is a strong selling tool, but there are a lot of reports that Facebook is decreasing in popularity with younger demographics and growing with seniors. What can retailers do to reach younger demographics via social media? How do you use social media to effectively market your brand? Is it a "must" for all retailers and manufacturers to build brand awareness?
Berk: Social media can be hard to wrap your head around. Right when you think you're on track and have learned how to really utilize it, things change. Just like a hot, new restaurant in New York City that is popular with the young generation and then a year later is filled with a much older crowd; this is what's happened with Facebook. Facebook could quite possibly be the next Friendster or MySpace. Recent reports show that Facebook is losing popularity with the millennial generation and I now get more comments on my Facebook posts from my mother and her friends that I do from people my age. Here are the top three places to be in 2014:
1) Twitter-More and more Millennials are shifting from Zuckerberg's social network to the microblogging site for want of "less drama." In 2013, we saw Twitter make its Initial Public Offering. With the site now trading on stock exchanges, 2014 is projected to be huge for the site by several market analysts. According to the findings of a 2013 survey by Pew Internet and American Life Project, Twitter is-wait for it-the new Facebook. Not many young adults want to hang out with their mother or have her see everything they do, and Facebook has seen an increased presence of older adults, leaving many Millennials to shift toward the next popular site-Twitter. In 2013, reports show that 26% of Millennials listed Twitter as their most important social media website, and the trend is only going to get hotter in 2014.
2) Instagram-A picture is worth 1,000 words and this makes Instagram the place to be. The ability to show customers new designs and video without saying a word is what attracts a younger demographic.
3) Pinterest: Staying with the trend of sharing content via images and videos rather than only text, 2014 is going to be the year of photos and videos. Millennials want visual content and embracing image/video-centric sites will be a smart move for businesses during the upcoming year. Socialbakers collected date during April to May in 2013 and revealed that 93% of the most popular and engaging posts on the web were photos.
F/T: Each year, Pantone (and other organizations) issues a color of the year. This year is Radiant Orchid. There will certainly be a lot of this color at market, but how much attention do you think the consumer really pays to the trend? How do you select your upholstery colors and why do you feel they are relevant?
Berk: We take the color of year releases with a grain of salt. Many are very hush-hush until the official announcement, and that makes it very hard to develop, produce and launch products before the next year's color is announced. But the color of the year is a very powerful marketing tool that shouldn't be ignored. One way we're able to utilize it is to pull products that we already carry that often are identical or very close to the color of the year and then push them on social media with the Pantone hashtag. We also add a side chair or ottoman to our sales floor featuring the color that allows us to have a customized product that is only available in our stores.

F/T: The furniture industry has focused a lot on price in promoting its products. As a member of the millennial group, you can offer firsthand perspective on the importance of price to this consumer demographic. What are your thoughts about the importance of low prices given the popularity of places like IKEA, Restoration Hardware and Pottery Barn?
Berk: Price is always a deciding factor with any age group. With the Millennials though, products with a story can help overcome the price factor by creating added value for products. Focusing on things like "American made" and designer co-branding can allow retailers to move higher price point products that attract Millennials in the store. Millennials want unique, quality products and are willing to pay more for those products. They love to be able to tell their friends the story of the products in their home, and the retailer's ability to convey those stories in social and in-store marketing is key in achieving the higher price-point sale.
Thanks to Bobby Berk for sharing his thoughts on marketing to Millennials. If you have a topic that you would like to see addressed by a designer, send your suggestions to me at chodnett@furnituretoday.com or post ideas to Cynthia W. Hodnett@Twitter.
at Tuesday, January 14, 2014 No comments: 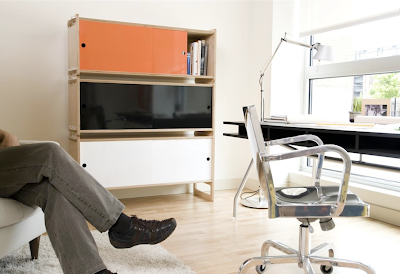 Now through January 31st you can save 15% off all Housefish Furniture.  HouseFish is intelligently engineered in America with it's slide and lock construction that makes assembly a breeze. Housefish was founded by Scott Bennett in Denver, CO. Scott holds a degree in Automotive Engineering and has design and engineering experience that includes Indy 500 winning racecars, composite aircraft, consumer products, and industrial equipment. 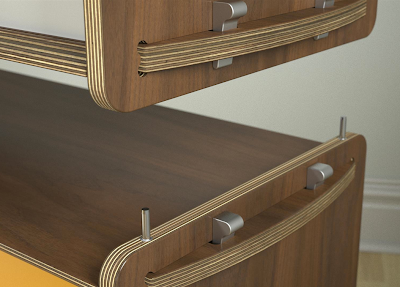 Housefish was conceived as a laboratory for using America’s high tech and industrial manufacturing technology to produce innovative modern furniture that remains affordable, and respects the environment and your health. Along with the design and limited manufacture of our own furniture line, we also help some of the country’s largest furniture manufacturers, retailers and distributors bring some of their most successful products to market

Looking for great modern furniture, bedding, and accessories for your home?